Having spent the night at Anderson’s Pea Soup Hotel and having had dinner at Anderson’s we were eager to sample other tastes. Just across the street from Anderson’s sits Mother Hubbard’s Restaurant, it seemed just right, not too far and the lot seemed to be loaded with cars, always a good sign. 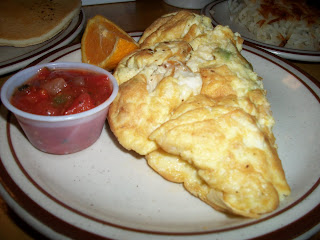 On first impression you are in someone’s home, one that is cluttered with knick knacks, pictures hung on every square inch of wall space. It has been a family run business for thirty years; a home that has seen hundreds of friends, family and neighborhood kids eat their fill and squeal with delight. It is furnished with small square tables with captain style chairs which have the patina worn from the back from all the hands scooting them in and out. There was just a tad bit of a stale smell perhaps from the throngs of patrons eating or perhaps because of the years of cooking and aromas stuck to those nick knack’s.

Quickly seated we got our coffee which was hot and not bad, water and menus in hand we quickly decided and ordered. I chose the Breakfast Wrap (Breakfast Wrap - Filled with spinach, Feta, and scrambled eggs with homemade creme fraiche, served with choice of tomatoes, fruit or cottage cheese) It was stuffed with feta cheese, scrambled eggs and accompanied with large slices of beef steak tomatoes. 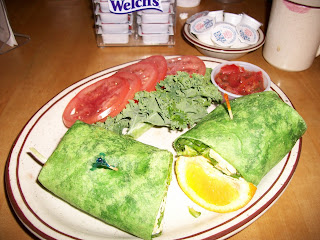 My son ordered an omelet ( The Californian - Avocado, diced marinated chicken breast and Jack cheese. Made with three extra large eggs home fries or hash browns, two home-made buttermilk country biscuits or toast and jam or have two cakes instead of potatoes and toast. ). He ordered it with hash browns and pancakes, which I thought odd but he seemed to like the double carb feature.

On first appearance my dish was a brilliant green tortilla wrapper stuffed with eggs and cheese. Once past the “green” the wrap was delicious and extremely large. My son’s omelet was also of good proportion and prepared very well, the hash browns were crunch and he stated the pancakes were also of good texture and taste.

The staff members were friendly, you get big portions and the prices were modest. You do get a lot of food for your dollar. The only drawback was that it was crowded, noisy and again slightly off in the smell. The remedy would be to remove one table from the front dining area and a good spring cleaning to remedy the other, for the noise remind yourself that you are dining out and to talk softly.
Posted by Pattie Sue Food Review at 3:48 PM