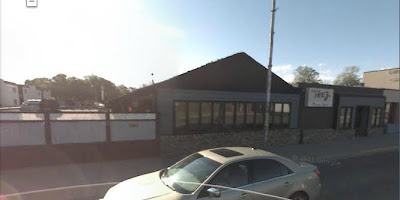 What can I say; first off although they offer a handicap spot directly in front of the entrance, they are not handicapped friendly. This would include canes, walkers,wheelchairs I think you get my drift. As you enter the first door, step down,the main door step down, if you enter into the bar area and want to go into the over flow dining room step down. And be careful, from the bar into the game/extended dining room it’s cement floors and can be very slippery. 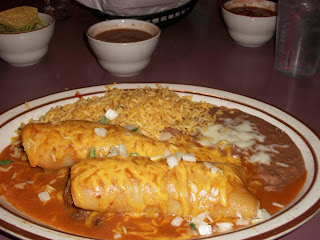 The décor is mediocre with more emphasis on the bar and game room than the dining room, originally the building housed a rustic steak eatery and not much has changed. They offer tables, booths and in the main dining room it is well lit. The menu offers the usual items from tacos, enchiladas, egg dishes even expanding out to a low carb menu. They offer dinner selections from Shrimp, Carnitas and Carne Asada to name a few light menu items such as Taco Salad or Chicken and 4 items for the kids menu.

A full bar, so diners beware weekends can be loud and cramped; diners with children should utilize the left side main dining room. Soft drinks with one refill, milk with no refill and no refills on children’s sodas. Wine is offered for $7.00 per glass and mixed drinks are priced based on the choice of alcohol.

The house salsa is a watery rather flat concoction of minced onions, peppers and cilantro with a heat index of zero. The “hot “variety is a bit thicker with added heat to about 7 out of 10 but again lacking that punch of flavor. The guacamole was okay, a generous helping and mixed with the hot salsa gave both a better taste.
Now the food: pre portioned frozen entrée items is the mainstay, with pre boxed Spanish rice with the texture and taste of Zatterans rice side dishes. The refried beans are flat tasting and the consistency of soupy beans. 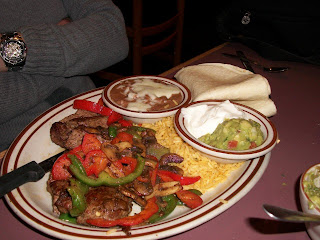 My entrée was the shredded beef enchilada which for the beef inside the corn tortilla and the rather bland and mild sauce poured over was served warm, not hot and bubbling such as all Mexican dishes are.

My daughters Carne Asada actually appeared as though it had been cooked from scratch due to the medium rare of the meat chunks and did have an okay flavor. Served
up with sliced peppers and onions and three medium sized flour tortillas perhaps the best choice of the evening.

For the non informed pure pallet Mama Inez might represent good Mexican food much as Taco Bell or Banquet Frozen Dinners; for the educated diner or even one who knows good Mexican food I would suggest looking for another adventure in dinning. 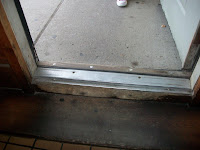 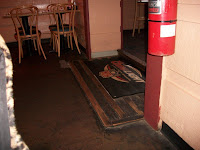 Posted by Pattie Sue Food Review at 7:26 PM No comments: 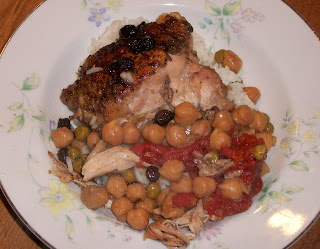 As I was watching the movie Casablanca the other day, I wondered what they might serve at Rick's Café Americain. That café was depicted as an upscale night spot catering to Europeans so it would have probably been something French. The more I watched the movie the more I wondered what might be served just down the street in a more native establishment, something with a real Moroccan influence. I thumbed through some old cookbooks, some even older newspaper clippings, put this and that idea together and came up with this chicken dish for the slow cooker that I think has a distinctly Moroccan influence. I found that there are as many as thirty spices that may included in a Moroccan spice blend, including such things as cardamom, nutmeg, anise, mace, cinnamon, ginger, all kinds of peppers, and turmeric. I adapted a somewhat shorter list with what I think are good results. I hope you will enjoy as much as I have.

Place the following in your slow cooker (Crock Pot), Your cubed onion, minced garlic, your drained and rinsed chick peas, your fruit (either raisins, figs or apricots) and finally the can of tomatoes which have been drained and the juice discarded. Stir gently to combine and add the chicken broth.

Wash and pat dry your chicken pieces. Rub the spice mixture on both sides of the thighs and place on top of the mixture in the slow cooker. Do not add the peas or olives at this time, wait until 1 hour before final cooking to add them (you can add at the beginning but the quality will be more like canned peas) and the olives will become quite mushy.

Cook on low for 6-8 hrs or on high for 4 hours. Serve with fluffy rice and add any garnish of your choice; suggestions are chopped green onions, chopped parsley or chopped cilantro.

Depending on your family you can serve the mixture over the rice or drained of the juice place alongside the rice. The juice and vegetables mixed with a small amount of rice make an excellent soup the following day.
Posted by Pattie Sue Food Review at 11:23 AM No comments: