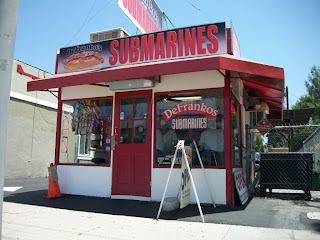 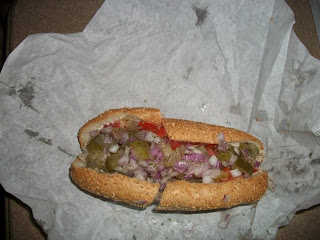 haired woman. Memories of those subs stirred his imagination. Were they still in business? Would the subs still be delicious? This was my quest; to satisfy my brother’s curiosity. Normally it would be simple drive by and see, but fate had him living across the nation in Florida and I in Idaho. Luck was on my side as my son was planning a vacation to Southern California and I was lucky enough to be invited.
After checking the internet to see if they were indeed still in business I was armed with their menu, a picture of the shop and camera in hand. Woodley Avenue runs north/ south paralleling the airport and several corporate type business’s, but as soon as you pass the last of these you begin to see single family homes, but don’t blink because nestled on the east side is DeFranko’s a q 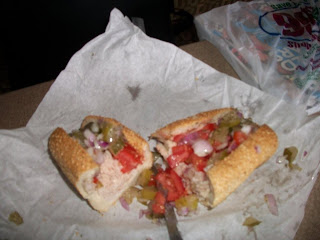 uaint red and white building with a small counter and 3 stools. Having sped by on our first pass we quickly turned around and parked in front of the building. It was crammed with customers. Now remember I said 3 stools. There were 2 customers sitting at the counter, and two more waiting to order and then my son and I were next in line. I thought we would be there forever. Not so for the man behind the counter was lighting quick.
The menu is simple with choices of beef, ham and cheese, Italian cold cuts, Pepperoni, Tuna and Chicken Calada and Capocollo and Salami. You toppings consist of finely diced white or red onions, dill pickles and chopped tomatoes. You dressings include mayonnaise, mustard, Dijon mustard, Italian oil dressing, and sprinklings of Italian herb seasonings. They have their own special Italian bread which is crusty and very tasty and the sizes are DeMini (4-inch), Small (8-i 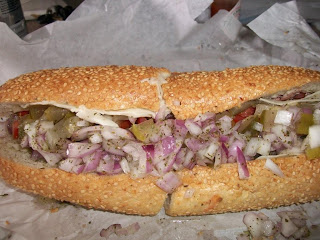 nch) and Large (12-inch) and are jammed full of ingredients.
The gentleman behind the counter asks your order and turns around and grabs several handfuls of meat and presses it into the bread, large serving ladles are used to pick up the onion, pickles and tomatoes. Our two sandwiches were ready in about two minutes. That included preparation, cutting the rolls in two and wrapping them. During our time in the sub shop I did manage to spot the owner, the young woman my brother remembered. Time has been generous to her as she still as quite attractive and very friendly with her customers.
There are no scales, no pre portioned packets of ingredients, just the very careful eye of the man who places the meat in your bun, tamps it down and then adds another for good measure. You will not go hungry. With our bag in hand we headed back to 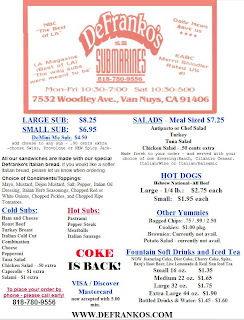 our R.V. to sample and savor our subs and most importantly report back to my brother if they indeed were the finest still. The subs are laden with meat and toppings, they are large and heavy and most of all out of this world. I am not a major sub sandwich person, but the taste of their seasonings and the crunch of the diced onions and pickles explode in your mouth. I got the 8-inch and was sated after completing the first half. My son got the 12-inch and just managed to finish his first half. We both had lunch for tomorrow.
I am happy and pleased to report back to my brother that his memories of a sub sandwich, which back then was heavenly, was still in vogue and DeFranko’s is still serving the valley the finest sub sandwiches. If ever you find yourself in the San Fernando Valley you owe it to yourself to seek them out and give them a try. You won’t be disappointed.