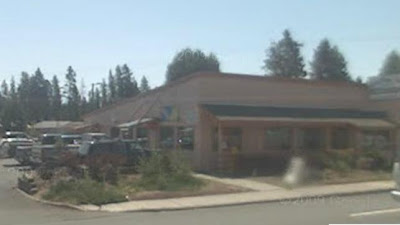 Our first stop on our trip found us at the Best Western Inn in La Pine on Sunday early evening. A small town mostly hinged around the main street we quickly noticed that most places were closed. Asking at the hotel we were told that there were a couple of restaurants open and headed out to locate them. One was about to close but we came upon another called the La Pine Inn and Lounge which was still open.

Rustic from the outside it resembled a modern day take on a log cabin, upon entering you encountered a western/oriental theme. Plank tables and booths with captain’s chairs, western décor on the walls shared space with the rich tapestry of the orient. At the cashiers station you can pay you bill and pick up oolong tea and perhaps a keepsake from Japan. We were quickly seated at a booth which I can only describe as the biggest booth I have even seen. The table spanned a good 4-feet in width and was not less than 5-feet in length. The tables and chairs seemed to share the same proportions, the area was clean and offered air conditioning.

They offered a fair selection of food items, from burgers, steaks, fries, chicken etc. to oriental dishes. They serve breakfast all day long and have a fully functional lounge. Of interesting note was that they brought us a condiment tray for our baked potatoes, containing sour cream, butter, chives and bacon bits. A nice touch I thought you can have as much or as little as you like.

My son ordered the pork chops which came slightly dry and overdone, accompanying them was the baked potato or medium size and some broccoli which had perhaps been sitting in the steam table since lunch service. Rounding off his plate was a small bowl containing about 2 tablespoons of applesauce. Let’s not forget the garlic bread which was butter with garlic salt and slightly browned.

I ordered the fish and chips, the fish was actually quite good, nicely fried and flakey however the French fries were overdone and it seemed they needed to change their oil. I also got a sampling of the soggy brown colored broccoli. We were both hungry and did manage to fill our belly’s despite the overdone, soggy and salty offerings presented to us.

Maybe it was due to being late on a Sunday I don’t know but I would rate the service at 6, the food at 5 and the overall would come in at 6. No I would not return if ever in La Pine again.
Posted by Pattie Sue Food Review at 2:41 PM