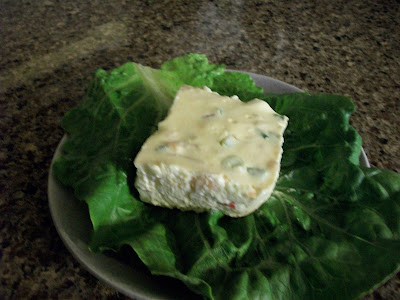 I found this 1950’s-era, hand-written recipe for Shrimp Salad in my mother’s recipe box. At first glance I thought a joke of some kind since it included shrimp with chicken soup. I asked my brother if he remembered anything like this and he said, “No.” My curiosity was aroused and after thinking about for a time I did some on-line research. I managed to find a similar recipe that called the salad “Yummy.” I surmised that it was a legitimate recipe and after some consideration I decided to give it a try. I have listed my mother’s version as well as the internet version for comparison.
Mother's Version:
1 can condensed chicken noodle soup
1 8-ounce package cream cheese
1  3-ounce package lemon gelatin
1/2 cup boiling water
1 cup chopped celery
1/2 cup each chipped green pepper, chopped green onion and chopped pimento
1 4-ounce can shrimp, drained


﻿﻿
When warm I could taste the creaminess of the cream cheese blended with the soup and shrimp, it was a harmonious mixture and pleasant to the palette. Once chilled I tried it and was not as impressed, although the mixture is still creamy I don’t care for the texture of chopped celery, onions, peppers adding that crunch and distinctive taste to the bite. Although I did chop them to a small dice perhaps a smaller almost invisible texture would suite my taste better. With an odd noodle here and there you cannot discernibly

find the chicken noodle soup both in appearance and in taste. Upon first bite you find a slight undertone of sweetness from the lemon Jello but it is quickly offset by the crunch and taste of the vegetables and then you come across the shrimp.

These shrimp are the canned salad variety, which are very small and minimal in taste but chewy in texture, taking a random fork full of salad one would not casually spot the shrimp mixed with the chopped vegetables. 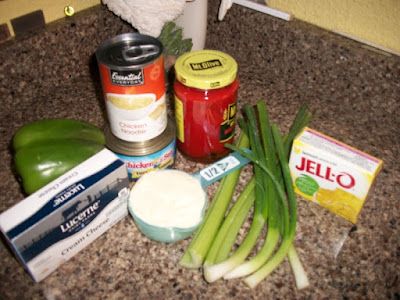 When noshing the salad you come across a rather dense mixture of “stuff” which is set apart from the crunchy, creamy salad you think you are eating. The on-line version called for the addition of chopped green olives which in reflection might have been far superior save just the addition of pimentos. The saltiness of the olives would have lightened the sweetness of the gelatin but also add the tang which this salad desperately needs. 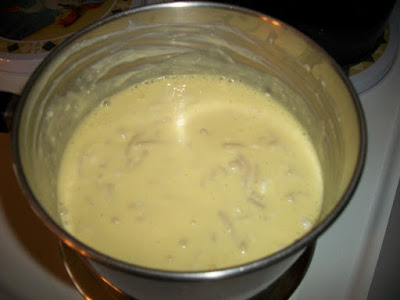 Would I try it again with these changes in mind? I really don’t know. First, it is not a cheap salad to make. Secondly, it makes a large pan full, and since it is so rich only a small portion need be taken. So you need either to have a large dinner party or a great liking for this salad to get your money’s worth. I did use a 4-ounce can of shrimp from the pantry to make the salad, extended cost of about $14.75 a pound. If you shop your supermarket seafood section, you usually can find 40-50 shrimp for about $7.00 a pound and the extended price for a 4-ounce purchase would be about $1.75. Planning ahead to make this salad would pay dividends. I think the flavor would be enhanced using fresh shrimp rather than the canned shrimp.

I asked two of my adult children to taste the salad. I didn’t tell them what the ingredients were to help keep an open mind. Here are their first impressions and initial critiques: Frist taster: It tastes good, slightly sweet but I like it, it sort of has a fish taste but can’t make out what type of fish. I would like this on crackers rather than as a salad, but I would eat it again if offered. Second taster: It is really good, perhaps do something about the sweet but otherwise the overall taste is really good. You could use it in a pinwheel roll up or stuffed in celery would also be a nice way to use this salad.

Late Note: In talking long-distance with brother, we have come to the conclusion that we did, in fact, as children, taste this concoction. We are now sure that the green mold salad mother made for festive occasions in a small fish-shaped mold was one-in-the-same as this recipe. For the most part we have no specific recollection save this: Brother asked if the salad had “celery crunch.” He does remember a greenish gelatin dessert or salad that had a pronounced celery crunch that he did not care for. Green gelatin dessert that crunches with celery? This had to be that same salad from sixty plus years ago.
Posted by Pattie Sue Food Review at 10:18 AM No comments: 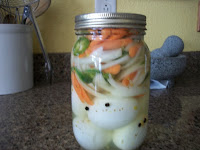 
I like to experiment; try and create a taste I think would be pleasing.
This is a variation on my other pickled eggs recipes for a change of pace.


CONTENTS:
1 to 3  tablespoons of sugar (Depending on taste)*
¼ to 1/2 teaspoon mustard seeds*
½ to 1 teaspoon black peppercorns*
½ cup water
1 cup white vinegar
1 small onion, sliced
8 baby carrots sliced lengthwise then sliced again
1 to3 small jalapenos (or 1 Large) seeded*
6 eggs hard boiled and shell removed
DIRECTIONS:
Add sugar, water and vinegar to a stainless or glass pot. Add all vegetables and spices; heat and simmer until sugar is dissolved.
Place eggs into a 1-quart mason jar, add vegetables filling the jar to the very brim. Add the liquid; cap and place in refrigerator for several days for flavor to develop.
To serve: Individually: slice egg in half and place in small dish with accompanying pickled vegetables;
OR place sliced eggs in a small platter, spoon vegetables around sliced eggs, I like to garnish with paprika sprinkled lightly over the eggs and a garnish of fresh parsley, you can also place the eggs and vegetables on top of a fresh bed of spinach.
I like my eggs slightly on the more vinegary and spicy side so I use less sugar and spices, however if you care for the bread and butter pickle taste do use the larger amounts of ingredients as listed.
The complete recipe can be found at: http://www.twentymile.com/Cookbook/patsspicypickledeggs.htm 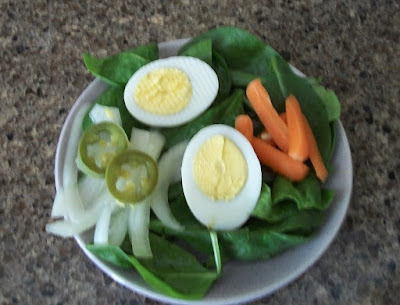 Posted by Pattie Sue Food Review at 1:10 PM No comments: