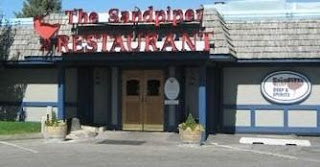 I have blogged Sandpiper in Pocatello several times and as my readers can attest, it is not my favorite place to dine. Yesterday was my oldest son’s birthday and as tradition goes, he got to pick where he wanted to eat. Yes you guessed it, Sandpiper! But this time not the Pocatello restaurant but the sister establishment located in Idaho Falls. A fifty two mile trip down the interstate, the historic district of Idaho Falls and the Sand Piper restaurant are situated alongside the Snake River. It looks exactly like the Pocatello building but that’s where the resemblance stops. Inside we were greeted by eager and friendly staff and quickly seated. Our table was by the window which normally would afford the diners a magnificent view of the river but in winter your view is that of a frozen river, still a fantastic vista. 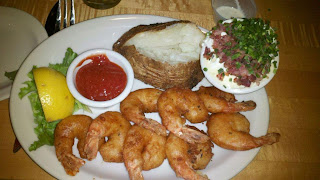 Our waitress was friendly, informative and eager to please but not overdone, she allowed us ample time to peruse the menu and the wine list. Our pre dinner drinks ordered, we eagerly read over the menu. As soon as our menus were closed she appeared to take our order. Almost as soon as she left she reappeared with fresh hot bread and our salads. My youngest son ordered the Caesar salad and had strips of fresh anchovies; my garden salad was a mixture of greens both mild and peppery. We eagerly ate all of our salads and a second helping of bread. 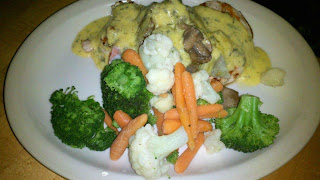 Sand Piper was having a wine special, so we chose a Cabernet Shiraz blend from Australia which to our great pleasure was a superb pick. Aromatic, smooth it paired well with our entrée selections. My youngest had the rack of lamb, the birthday boy had a sirloin steak our guest had the battered shrimp and I picked the chicken Oscar. I had reservations about the entrée’s since the Pocatello menu offered the same choices but in children’s portions. To our enjoyment, when the dinners arrived we found them more than ample; in fact we all had to go boxes at the end. 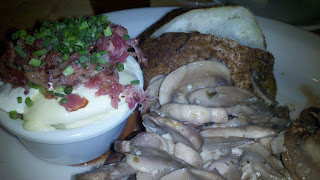 The lamb was expertly grilled to the rare ordered, the shrimp cooked through but not overdone. The steak was charred to perfection and my Oscar was tender and the crab meat was the intact claw portions. The baked potatoes were of good size and the steamed vegetables done to a turn. We all thoroughly enjoyed our dinner and all attested we would have changed nothing. My youngest son tipped the waitress about his brother’s birthday and she soon appeared offering any dessert item free of charge. He ordered the chocolate turtle dessert, which was a thick and gooey deep chocolate brownie surrounded by scoops of vanilla ice cream and covered in thick dark chocolate sauce. 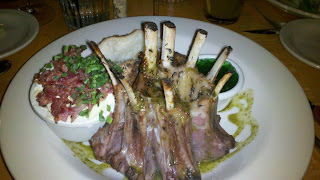 Reservations are suggested especially for the weekend. They have a separate bar and lounge section and there are steps, a ramp is available but since the lighting is dim caution is suggested. All tables, no booths, but all afford a view of the river and beltway. The prices range from $14.00 to $26.00 with daily specials. A full bar and an excellent wine list pair nicely with the menu items which range from sea food, pasta, beef and your usual salad assortments.

Just don't feed the ducks on their deck in the spring...the owner is not pleasant in his way of asking you to stop! ;o) I LOVE the view, however, and the food! Yummy! My favorite dish is the "Hawaiian Crunch Halibut" or the "Ahi Tuna." Mmmm....