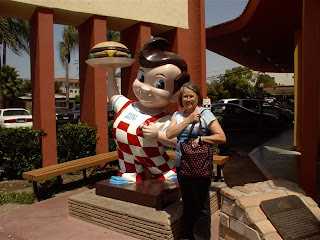 As a small child it was a treat whenever we went out to dinner and when it was at Bob’s it was even more special. We grew up on the Bob’s Combination Plate, a wedge of ice berg lettuce with a generous dollop of Thousand Island dressing, a helping of golden brown French fries and the star, the Big Boy it’s self. It had a three-slice bun, a bottom, middle and a top, and two nice size patties with cheese and their Bob’s special sauce. A red tangy relish with a hint of vinegar made your taste buds explode on that first bite, of course they also placed lettuce on the burger, but it was the layering that made the Big Boy a joy to eat. With each bite you got the taste of the bun, burger, cheese, lettuce and the sauce in each and every mouth full. And putting your mouth around it was no simple task; it was about a 5" bun with meat to equal the size of the bun. Recently, when my son and I planned our trip back to Southern California, I remembered how it was and I said, "I’ll take you for a real treat, to Bob’s Big Boy."
This Bob’s is the last one around. Located on Riverside Drive in Burbank, or some say Toluca Lake, has memorabilia handing on the inside walls. It make an oldster remember their teenage years and the youngsters giggle at the hair styles we used to sport. The booths still look the same and it even seem to have that smell of years past. That’s where the similarities ended. I had been tooting my horn to my son for so long aboout he way it was that he was eager to savor this icon of the burger world. Sitting to my right was an elderly couple who had just been served what I thought would have been the senior burger and small sampling of French fries. Alas, not so. 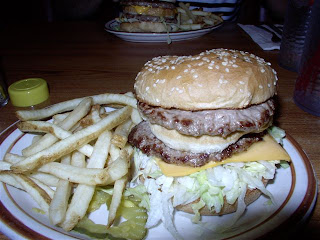 I ordered the combination plate as did my son. We soon got a dinner salad in a bowl; mixed greens with a couple of slices of cucumber and some rather hard croutons. Okay so being served a wedge of ice berg might be too costly, so I’ll give them that one. But when to my utter astonishment the waitress presented us with the exact same plates the older couple had recieved, STOP! WAIT. This could not be so. I got a 4-inch bun with scanty patties with a small piece of cheese and a scattering of lettuce and sauce, when she said, " Enjoy," I could have swallowed my tongue. Enjoy what, here sat a sad and rather ugly looking burger on a small plate with some flaccid, pale and definitely not golden brown French fries. And my pickle, it had a whole in the middle. 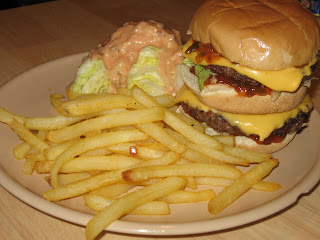 My first bite was a complete disappointment and it continued throughout the meal. My son was a little more polished than myself in that he did not make the facial gestures or groans his mother did. Before we ate I snapped the burger to make sure all could see the sad portrayal of a once iconic burger. Some days later, I told my brother about the dismal state of the Big Boy. He recreated the burger we once had grown to love and to this picture I say to anyone who had once loved the Big Boy all is not lost, it still lives in your heart and soul. All you need to do is recreate it and enjoy it now and remember it from your youth, but if you are walking down memory lane and happen to be in Burbank and have the hankering for a Big Boy, walk on, Patti’s down the street is still open.
Posted by Pattie Sue Food Review at 11:08 PM