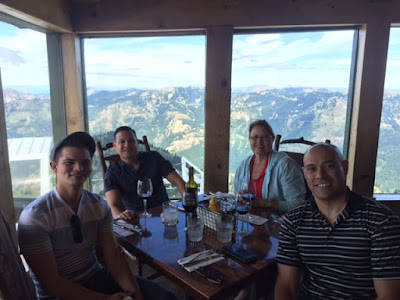 From Kent, Washington it was a lovely 58-mile drive along pine studded two lane roads leading you to the Crystal Mountain Ski Resort nestled snugly on the side of a small hillside in the Mt. Baker-Snoqualmie National Forest and overlooks Mt. Rainier.  To get to the restaurant you need to ride the tram up the hill; it was $23.00 for adults and $18.00 for seniors, Right off the bat we had expended nearly $100.00 for our party of four.  The ride itself is specular affording you a breathtaking view of the small valley you drove thru and the majestic mountains that surround the resort. 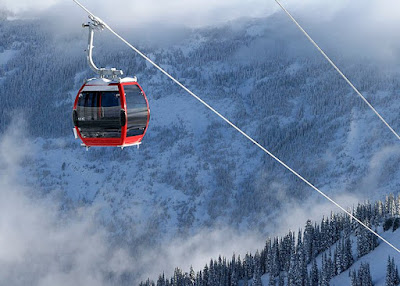 Once you arrive at the top and disembark from the tram you are greeted by the majestic panorama of Mt. Rainier and the seemingly magical valley below.  The restaurant is situated at the top of the hill and affords patrons views of the surrounding mountains. Situated at 6,872 feet above sea level, it is billed as Washington’s highest elevation restaurant.  If you dine outside on the patio there is the added bonus of the Mt. Rainier vista.  During the off season, dining service stops at 4:40 and we had arrived around 2:30, so this would be a very early dinner for all of us.


The restaurant is named “The Summit House” and is a casual eating establishment, frequented by off season patrons as well as the avid ski buffs during winter.  A rustic knotty pine clad room with tall windows on both sides of the room and the tables and chairs are rustic pine wood. It should be noted that there were flies inside, some the size of horse flies but; oddly enough they stayed on the glass windows and did not fly around us or the food. 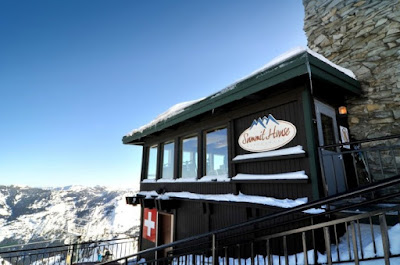 The menu offers a good variety of appetizers, soups, salads, sandwiches, a kids menu and a choice of four desserts. They offer signature cocktails, beer and wine by the glass or bottle. Assorted soft drinks, coffee, tea, hot cocoa and homemade ginger ale and homemade lemonade are also available.  An automatic 20% gratuity is added to tables of six or more and there is a two check per table maximum. 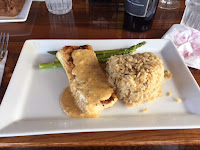 Our choices included the Catch of the Day ($25.00) which was Mahi Mahi with a spicy sauce paired with rice pilaf and grilled asparagus spears. The fish was grilled nicely but the sauce lacked in depth or spice.  The pilaf was overcooked but the taste was adequate, the asparagus spears had a nice al dente snap to them. Next was the grilled Halibut tacos served of flour tortillas and accompanied by refried beans and Spanish rice. 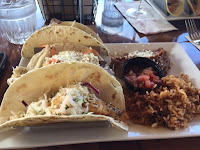 Next we ordered the Grilled Halibut Tacos ($26.00), three tacos served on flour tortillas and paired with refried beans and Spanish rice.  The fish was moist and juicy and topped with a chipotle sauce and a pineapple slaw.  The beans were a bit on the dry side and the Spanish rice was ordinary but still tasty.  You also got a small size container of fresh Salsa which helped to brighten the otherwise mundane flavors of the rice and beans. 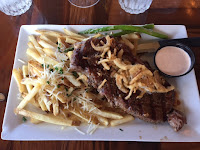 The third choice was the New York Strip Steak ($29.00) paired with truffle fries and seasonal grilled vegetables. The steak is topped with herb butter and crispy Shitake mushrooms.  The steak was ordered medium rare and was medium when served but the taste was excellent, it retained its juiciness.   The Truffle fries were the hit of the table, taste, texture and aroma were divine.  This entrée was also served with grilled asparagus. 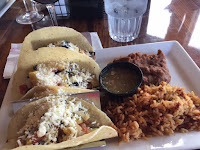 Our final choice was the Zucchini and Corn Tacos ($16.00), three corn tortilla tacos laden with grilled zucchini, corn, onions, tomatillos and black beans.  The taste was excellent but eating them was difficult because excess moisture wicking into the tortillas caused them to fall apart.  None the less they were delicious.  This entrée was served with the refried beans and Spanish rice also.


We paired our entrees with a bottle of Cabernet Sauvignon from the Seven Falls Winery in Washington State.  It is a deep coffee, cocoa flavored wine with hints of plum and cherry and a slight under taste of mint.  It paired well with all of our entrée choices.  The bottle price was $39.00 a bit cheaper than the per glass cost for four patrons.


Our server was nice and provided our food and wine promptly, however when she asked how our food was, she added no response when told about the over cooking of the meat. She then asked why we had ventured to the top of the mountain and was informed we were celebrating a birthday; she offered no complimentary dessert even in the light of the cooking of the steak.


Our tram ride and meal came to over $220.00 not including tax and tip, would I go again?  For sure but not for dinner, I would enjoy a bottle of wine out on the patio while savoring a pile of Truffle Fries.

You can check out their summer menu at: https://crystalmountain.scdn3.secure.raxcdn.com/wp-content/uploads/2014/10/Summit_Summer-4.pdf
Posted by Pattie Sue Food Review at 2:30 PM