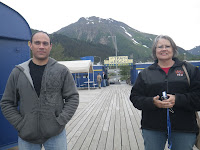 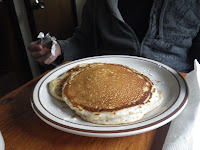 We arrived early in Seward looking forward to a day at sea and what better way to start off than on a train for breakfast.  We spotted the Smoke Shake as we drove down towards the Marina; we had plenty of time for a leisurely breakfast and decided to give this quaint eatery a try.  Several Pullman cars from the 1940’s are joined to fashion this diner; seats removed and simple plywood seats and tables have been added.  It has tables on both sides and a narrow corridor leaving very little elbow room.
Rustic to say the least, your silverware is in a mason jar on the tables, there is no padding on the seats and you can feel the cold through the thin metal walls and non insulated windows.  Still in all it was a novel experience, this train carried Military Troops during WW II from Anchorage to Seward.  This small sea side town was home to some fortified installations along the fjord providing advance warning from attack from the sea. 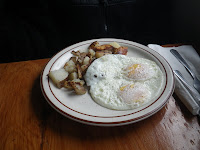 
Coffee is served in large mugs, piping hot; not great, not bad with refills upon request.  Our orders arrived about 10 minutes later.  From my seat I had a good look straight at the cooks, this car had customers on one half and the kitchen occupied the other with no barriers to hinder your view.  The cook was young and worked feverously at preparing the orders, while as far as we could tell was also prepping food for the lunch or perhaps dinner menu.  The hostess took care of the toast while serving and taking the orders. 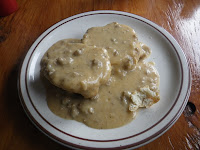 My two eggs were nicely cooked however the various sizes of the potatoes gave me some overcooked as well as undercooked pieces, my wheat toast arrived almost uncooked and cold.  My son’s pancakes were large but still a bit undercooked to his liking; Brother Larry’s order was so laden with pepper it was almost too much to eat.  Still being up since 4AM and starving we did manage to down almost half of each order.  I left my potatoes, my son nibbled around the outside of the pancakes for the most cooked portions and my brother ate the majority of his biscuits while pushing aside most of the gravy.


Still the ambiance of eating on this historic train was well worth the price; I will say however that the hostess did need to pay attention to her appearance; her skirt was also used as her apron I think since most of that mornings affairs were affixed to the skirt and her hair was a mess.   Would I go back and eat at the Smoke Shack again, sadly no; it offered nothing new or exciting.  The food was mediocre at best and one needed to dress warmly since I don’t think there was heat except that coming from the kitchen.  But one does owe it to themselves if ever in Seward to at least try one meal, just for the experience and just so you can say you ate on an historic train that helped safeguard us during such troubled times. 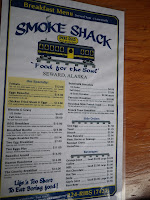 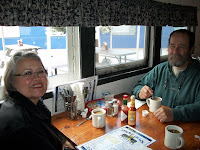 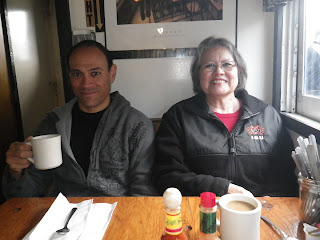 Posted by Pattie Sue Food Review at 10:00 AM