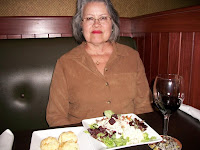 I usually don’t need a reason to dine out. Being it was my birthday, I got to chose where and when. Since I had never eaten at the much advertised restaurant chain of Ruby Tuesdays, it was an obvious choice. The décor is an upscale version of most chain establishments, tables and booths and a centralized bar area with seating and even dining al fresco weather permitting.
We were quickly seated in a booth, which I soon realized was just a bit smaller than your usual booths. My daughter and I were touching shoulders and my son easily fit into his solo position opposite us. None the less, the wait staff was pleasant and efficient. Menus in hand we soon picked our entrée’s and salad bar. The salad bar is modest in size but does serve mescaline greens, romaine and ice berg lettuce, and prepared salads of potato, macaroni and my favorite of the evening blue cheese cole slaw. There are your usual toppings and about 6 dressing choices. They serve a garlic cheese drop-style biscuit with your soup or salad - don’t get too hungry because the size is not much larger than a silver dollar - not to be confused with the generous portions of the same style biscuit served to you at Red Lobster. And one per customer, at least that is what we were served. 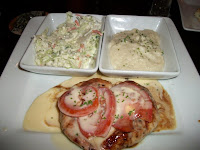 I chose the Chicken Fresco, a chicken breast topped with vine ripened tomatoes, lemon butter sauce and a drizzle of balsamic vinaigrette. It was served with sides of creamy mashed cauliflower and Bleu cheese coleslaw. The chicken was moist, had good flavor and a sufficient portion. The sides were adequate and served to accent the chicken.
My son chose the Chicken Bella, “Sautéed baby portabella mushrooms and artichokes in a Parmesan cream sauce over a fresh, grilled chicken breast.” The sides were white cheddar mashed potatoes and fresh, steamed broccoli. The chicken was well cooked, moist and tender, the sauce flavorful but not overpowering the chicken or mushrooms. 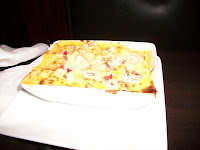 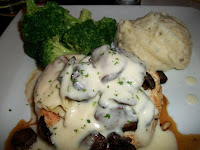 My daughter wasn’t very hungry and chose a side dish, Lobster Mac ‘n Cheese, for her dinner. The menu describes it as, “…the ultimate Mac ‘n Cheese, made with chunks of lobster meat and rich, creamy cheese. The classic comfort food!” Curious, we asked the waitress if the lobster was real and were assured it was. Although a side dish it was not too bad, but not that great; after all it was a side and meant to be eaten with other food.
They have a nice wine list and actually offer you a choice of prices per glass to choose from, a good selection of beer and a full bar plus the usual non alcoholic beverages. I chose a medium priced Pinot Noir to accompany my dish, my son opted to try a seasonal draft which when served was dark and by the expression on his face very bitter. The waitress took it away after a little discussion and served up a glass of regular beer.
It is a nice family style establishment which offers a wide variety of food choices at medium prices. For a casual luncheon or dinner Ruby Tuesday’s is a nice option.
Posted by Pattie Sue Food Review at 5:40 PM